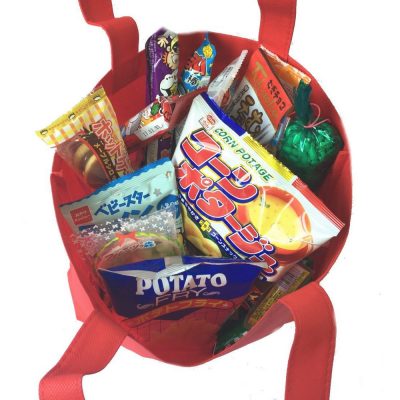 Japanese Dagashi Sweets and Snacks Mix 50pcs. Made in Japan

Dagashi is cheap snacks loved by the common people of Japan since long ago. In Japan, both children and adults enjoy dagashi, which reminds them of the good old days.
Dagashi come in many different flavors, sweet, spicy, sour, or salty. Out of the hundreds of kinds of dagashi, we carry an assortment of the kinds popular among foreigners.
Find your favorite tastes.
Dagashi used to be sold in traditional stores specializing primarily in Dagashi called “Dagashiya”.
Traditional dagahiyas have been declining rapidly.
However, Dagashi and Dagashiyas have attained more attention in Japanese pop culture with the release of the anime Dagashi Kashi.
The anime covers some of the most popular Dagashi, as well as more obscure kinds.

– Content of products: 75 pcs.
– Expiration date: More than 2-3 months (described in each package)
– Product display language: Japanese
– We do not deal with any of food allergy.(Ingredient labeling is printed in Japanese on each Dagashi package.)
– Made in Japan.

-Customs may also inspect goods prior to delivery, which may cause a delay to the delivery of items.
-The pictures are samples. Products may vary since they are assortments.